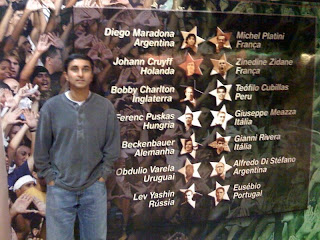 Walking along the corridor in Maracana stadium in Brazil last month, where the mighty Diego Maradona and other football greats also walked, I had to stop and freeze that moment in time.

Now, it appears as though Maradona is really going to coach Argentina's national team!! Interesting move indeed! FIFA has compiled 10 important days in his life, but the event that defines him is surely the second goal against England in the 1986 World Cup (after the hand of god goal).

True story: A few days before his drug test turned out positive, I had a dream that he was wearing pyjamas and banian (Kolkata street style), and "taking drugs" - I was scolding him in the dream!! Everyone I told about the dream had a good laugh, until he was thrown out unceremoniously from the 1994 world cup a few days later! Argentina went downhill in the tournament after that point.

Risky move! But I will be rooting for Argentina and Brazil!
Posted by rajat.mukherjee at 3:29 PM No comments:

Slow down or die! 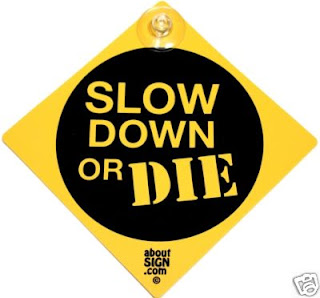 A warning for Silicon Valley? Researchers found that turning back the clock by an hour (end of daylight savings time) implies fewer heart attacks! It's probably the extra hour of sleep!

Conversely, losing an hour of sleep caused more heart attacks at the onset of daylight savings time, especially on the first 3 days of the week.

Now - I have not yet died of a heart attack (as demonstrated by this blog post), but I have had issues with sleeping enough! Don't ask me why, but I keep waking up earlier than I need to! I'm sure this is also a problem for lots of other folks in the valley - so the question is - is there a higher incidence of heart attacks (health issues) in cities (countries) that are moving at the speed of Silicon?

This is a good report by the Swedish researchers! Yaaa!
Posted by rajat.mukherjee at 3:34 PM No comments: 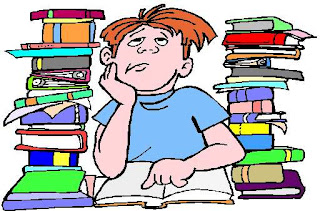 Rovio is in a new class of toys! This roving robot performs surveillance of your home, so you feel safe when you are out. These gizmos may become status symbols, but the important thing is the viablility of robotics!

Many other utility robots are already invading your backyards (Robomow), carpets (Roomba) and swimming pools (Verro). iRobot (the company), and iRobot (the movie) are both rendering Isaac Asimov's dream world (I, Robot) into reality.

Now that you can effectively find all information on a topic online, the question is this - is a program - that goes to Wikipedia, performs concept analysis, summarizes multiple other articles from the Web, creates and formats a document, prints it out and orders the printer to staple it into your report to submit to your teacher - a robot or a homework helper?

Welcome "Homework Robots"!
Posted by rajat.mukherjee at 1:06 PM No comments: 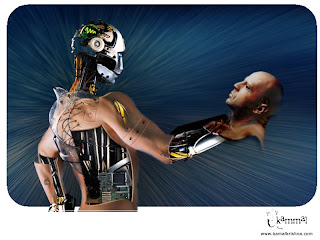 The Singularity Institute for Artificial Intelligence is preparing for the day that machine intelligence exceeds human intelligence (maybe that already happened with Deep Blue beating Kasparov?). The Valley hosts their annual conference this weekend.

The improvements in machine compute power, cooler processors, solid state memory without moving parts, portable audio and video, machine translation and voice recognition have brought the electronic part of the equation to a very compelling point.

The news that you can circumvent natural circuits in the body, re-routing brain signals to bring back movements to paralyzed limbs, brings electronics and computing into the world of the cell.

Take that one step further with genetic engineering and personal DNA analysis, and optional sources of stem cells, and the unknowns of biology are beginning to get conquered.

Put them all together, and ...the viable Cyborg is here.

Android is already here :-)
Posted by rajat.mukherjee at 4:07 PM No comments:


Science fiction can become science (Arthur C Clarke and satellites)! What was thought-provoking DNA-based decision-making of the future is now real - the Personal Genome Project just put 10 prominent experts' DNA fingerprints online for the world to examine and research! They want to grow this to a 100,000 participants.

The issues around privacy, discrimination, medical coverage, and, possibly, employment and marriage, will soon be highlighted and discussed, bringing GATTACA, one of my favorite science fiction movies, into the real world!

Gene-testing startups like Navigenics and 23 and Me offer a mini-genetic analysis for a fee - you can find out if you have a pre-disposition or risk for a disease. They are socializing and democratizing personal genetics! Genepartner has already started providing a gene-based dating service (Love is no coincidence!!).

It will become interesting when, in addition to determining the sex of your child, you order from a menu that you'd like genes for...hmmm...music, art, mathematics...and let's throw in some soccer!

GATTACA! The future is NOW!
Posted by rajat.mukherjee at 3:34 PM 2 comments: 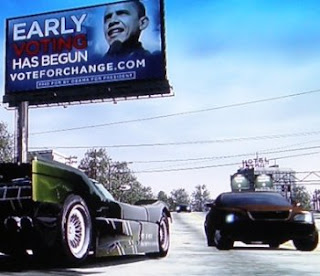 The stakes are high, the means to the end are as diverse and hi-tech as you can imagine.
We've already seen how the electorate can be mobilized, and how millions of dollars of funds were raised a few dollars at a time on the Internet, via candidate sites like ww.barackobama.com and www.hillaryclinton.com.
Now, raise that one level. Obama is apparently running an ad within the video game Burnout Paradise. I think that's a fantastic idea, especially if getting that disinterested voter off his couch is important.
I also learned that Governor Mark Warner apparently did a press event on Second Life - that's pretty cool too! The idea there - go to the electorate if the electorate will not come to you. That could be a mountain of votes!
I guess this actually works because these candidates just TALK  - they don't DO much online! If they did, there would be  a lot of stuff that would be censored, given that some of these powerful people use their power and influence in, shall we say, creative ways?
Maybe that's really the application for virtual worlds, such as Second Life and Lively, in politics. Keep the bad stuff in the fake world!
Posted by rajat.mukherjee at 12:04 PM No comments: 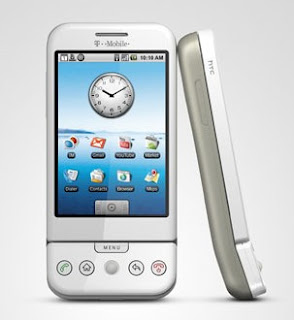 Well well well...it seems that there's a little fight in the offing! News that there have been 1.5 million Dream phones pre-ordered bt T-Mobile from HTC  indicates that the iPhone may indeed have some interesting competion in the near term, although there's some scepticism about the numbers.
The iPhone, which just assumed the position of the 2nd best-selling handset in the U.S., is a worthy target!
The Dream is the Google Android phone (also known as G1). This,  in addition to the funky virtual keyboard with haptic feedback promised by the Blackberry Storm, constitutes interesting timing.
Let the games begin.
Who is the Dream team?
Posted by rajat.mukherjee at 11:58 AM 2 comments: 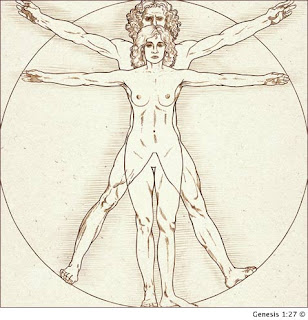 We were discussing caffeine (stress and being grumpy) on our way to a meeting at work, but there were 2 interesting and seemingly important health-related news items that caught my eye today - with different consequences for men and women.

First, for women...the OvaSure test that tests for early ovarian cancer with reasonably high accuracy (it seems) has been flagged as illegal by the FDA - sounds a bit bureaucratic since it is a test (not medication) . Hopefully approval is just a matter of time, as the tradeoffs seem quite dramatic, as quoted below:

More than 21,000 new cases of ovarian cancer are diagnosed annually in the U.S.; more than 15,000 women die of it each year. When ovarian cancer is caught early, the five-year survival rate is over 90%, according to the American Cancer Society. But only about 20% of cases are caught that early. When it is discovered later, the five-year survival rate is less than 30%.

In a study published last February in the journal Clinical Cancer Research, the test correctly identified 95% of cancers in 224 samples, with a false positive rate of 0.6%. But because it hasn't been validated in the usual gamut of tests, some cancer specialists remained wary of it.

Next, for men...certain cells from male testes behave like embyonic stem cells and can be cajoled into becoming heart, bone, pancreatic and nerve cells. The downside ...benefits could only apply to men.

While using these cells would be far less controversial than using embyronic stem cells, imagine a brain grown from these cells!!

What's on your mind today?
Posted by rajat.mukherjee at 11:31 AM No comments:

Going Green inside and out! Well - it is kinda impressive - what they do with this GFP, which comes from jellyfish. It is being used to study the progression of diseases, examine embryo, tissue and brain development, as well as mark cells and proteins for research.

The spectrum of colors has increased beyond green. As quoted:

Harvard researchers announced that they had tagged brain cells in mice with some 90 colors. The technique is called "Brainbow".

For a change - color discrimination for a good cause!
Posted by rajat.mukherjee at 4:02 PM No comments: 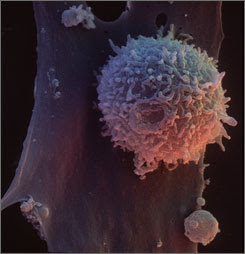 I'm no expert on molecular biology or genetics, or even the scientific process driving modern medicine, but it is ironic to see that the basic human instincts of envy, greed and ego are driving not only the geo-political imbalances in the world, but also drive negative behavior among the most erudite - the scientists!

Even in Silicon Valley, you see this from time to time - with respect to patents, founding, e.g., Wikipedia, ideas and credit, e.g., Facebook - ConnectU. The right people often get forgotten when convenient to some parties! Fame and fortune drive people to this.

The excuse...it's only human!
Posted by rajat.mukherjee at 3:32 PM 2 comments:

Gandhi across the world! 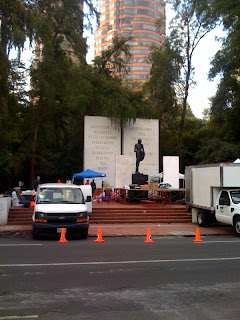 On Gandhiji's birthday (Oct 02) it seems only right to post the picture of the great man from my recent trip to Mexico City.

I'm not a huge fan of all his philosophies, but there's no question about his greatness and his influence across the globe!

Apparently, there are statues of Gandhi in 70 countries across the world!

One thing we do need in this world - peace!
Posted by rajat.mukherjee at 5:00 PM No comments:

Google just celebrated its tenth birthday! In celebration, Google put out a special site that chronicles various launches and other events. It's searchable via Google Site Search :-)
More entertaining is the approximation of Google's 2001 index, which reflects the state of the Internet in 2001. You can search the 2001 Internet! Remember, when you search, you're searching an index that reflects the content available in 2001. Some of that content no longer exists, so click on the link that says "View old version on the Internet Archive". This should show you a snapshot of the old (archived) page.
Search for currently relevant queries and you'll find some really entertaining results, e.g., "iPhone" - click the Internet Archive version of the "Infogear iPhone" result (or one of the others...) gives you an interesting view of what the "iPhone" was in 2001 :-)
Very im-mobile!
Posted by rajat.mukherjee at 4:31 PM No comments: