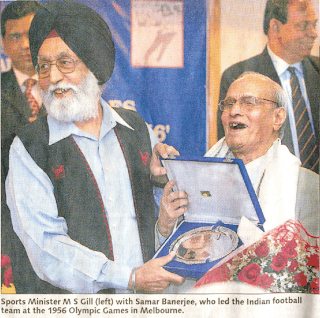 That's my uncle Samar Banerjee (mother's brother) - football gene in the family!! He was the captain of the Indian Olympic team that earned a 4th position finish at the 1956 Melbourne Olympics (India's, all but forgotten, best-ever football (soccer) finish at the Olympics).
This week housed a moment for our family to cherish!
The Indian government finally decided to felicitate their achievement! 52 years too late...
Better late than never? IST, also known as Indian Stretchable Time, has really stretched things a little too far ...Of the team of 18, only half are still living, and only 7 could attend! Read the newspaper article for one of the players' appropriate reaction (Tulsidas Balaram).
Well...at the very least, a few families can enjoy the moment!
Posted by rajat.mukherjee at 4:00 AM 3 comments:

All of us went through a severe bout of the flu this year!

No point taking flu-shots, since people get sick despite them ... right?

Well ... that may not be true anymore - scientists seemed to have figured out how to fight these (and other viruses, including the bird flu) by tackling them at the legs with antibodies instead of a head shot. The viral lollipop is apparently in trouble against these antibodies that the scientists threw at them!

Influenza is especially difficult to fight because it cloaks itself in lollipop-shaped proteins called hemagglutinin and neuraminidase, which mutate regularly and give influenza A strains the "H" and "N" designations in their names.

Now - revisit that glass of red wine each day, you damsels! Even a glass of alcohol a day could hurt you. Yeah! I'm confused too...

Replace that glass of wine with a cup of Vitamin D milk - add antibodies for taste!
Posted by rajat.mukherjee at 5:10 AM 2 comments:

A big day for trash! 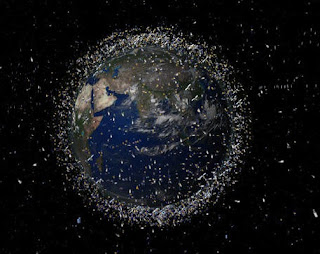 Much ado about trash!
I haven't seen it yet, but have read about it and am looking forward to seeing and judging Slumdog Millionaire for myself.  The rags to riches story - taking humanity from trash to hope - won big at the Oscars (8)!
I'm sure the movie is great, and, if not anything (anybody) else, the Mozart of Madras (A.R. Rahman) deserves accolades for entirely morphing the (Indian) music industry and giving millions of people joy over the years. I'm hoping the movie isn't a whole lot of stereotyping...I've heard about some nasty scenes...
On an (un)related note, the trash generated from the recent satellite collsion in space could well jeopardize future space travel and can even hobble Hubble!!
This morning, our EZDrive driver asked me how things were different between India and the U.S.  I talked about a few things - city-planning,  lifestyle - food, culture, independence (e.g., domestic help), driving :-), corruption (high-level vs. pervasive), etc. I couldn't help but mention that the U.S. and many other countries, including Singapore, are far better than India regarding trash! If all budgeted money went into their targeted public works projects, instead of lining peoples' pockets, maybe the trash issue can actually be addressed!
It does seem like humanity is intent on creating more trash, even in space, and maybe Wall-E really depicts a slovenly human race.
What are we doing to our environment?
Should we trash hope?
Posted by rajat.mukherjee at 11:48 PM 2 comments: 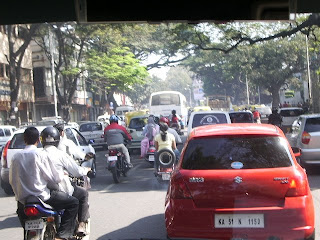 I'm not yet ready to drive all around Bangalore given that -
Anyway - we've found this interesting business called EZDrive that you call, and they send a (presumably trained) driver who will drive your car around for a few hours for a reasonable fee. Pretty neat (so far)!

They don't have a web site yet - mobile phones and cash are just fine!

Is this a perfect dot drive business or what? 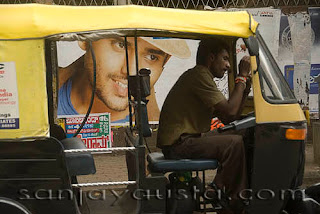 I'm in India's Silicon Valley for 3 weeks - working from the Bangalore Google office. It so happens that my parents' new flat is right across the street from the Google building, and I don't even need to take an auto!!

The traffic overall is pretty bad and the urban sprawl is mind-blowing (all those paddy fields and empty spaces we used to pass when we went by bus to school....replaced by houses and hi-rises). The subway (under construction) makes its presence felt in unexpected ways!

At home, I stole wireless network access yesterday morning, but the network was gone in the evening :-( - so it's back to dial-up (need broadband...need broad....band...). Cha!

I wake up too early in the morning - there's a temple here that has decided to blare the morning prayers to the whole neighborhood, and the dogs are also at their merriest in the AM. There's a broad variety of horn tones on vehicles ... some can actually shock you if you're not prepared!

The smells, the food, the people - however unfamiliar it seems ... it is all comfortingly familiar ...

Tickets from San Jose, CA to Bangalore, India - $1300
Great lunch at Google's Bangalore cafeteria - $0
Walk across the road from the flat to the office - priceless!

Walk to work - that's a luxury that the Google Bangalore employees don't have!!
Posted by rajat.mukherjee at 1:00 AM 6 comments:

Apples to oranges for memory loss 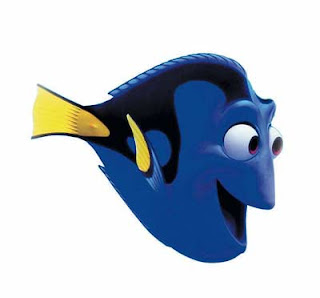 Technology die-hards live technology! Steve Wozniak, co-founder of Apple, recently accepted a position at Fusion-io, where a friend works (he pointed me to this news).

I've always been a fan of solid-state memory, and it appears the time has come! Not sure how Fusion-io offerings differ from those of the bigger players, but they seem to be on the right track - in bed with IBM, HP and Dell. (Of course, Dell just got a little air knocked out by none other than Mr. Putin!).

Good news .... soon, I can plug one of these babies into my brain to account for my memory loss!
Posted by rajat.mukherjee at 11:41 AM 2 comments: 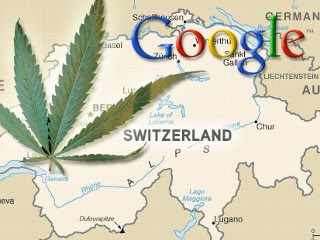 It is unclear what exactly the policy on legalization of marijuana will be in the coming years, but while folks, especially in San Francisco and Berkeley, have clamored for legalization for some time, some farmers in Switzerland have taken their own stance and have been growing a few acres of pot in a corn field undetected... until now!

Enter Silicon Valley! The smart roving eyes of Google Earth have found this embedded pot plot in the middle of Swiss cornfields, leading to a little inconvenience :-)

Update: The Phelps story indicates a lot of demand for this stuff ...someone's got to grow it!!!
Posted by rajat.mukherjee at 5:03 PM 3 comments: