I hope my wife is not reading my blog. "Y" you ask? I now have the perfect argument when she says I'm wrong (which happens a lot):

"You're the prettier gibbon, lipstick and all, but hey...I'm more evolved!!"

Research, presented in no less a journal than Nature, shows that while the Y chromosome (half the size of the feminine counterpart X), much maligned over the years as being responsible for men behaving badly, has actually been very very busy ... evolving!

While the rest of our human genome (X included) differs from chimps by only about 2%, the champion Y has been found to be 30% different. More impressive, this has happened in short order!! Only 6 million years!!

My earlier theory on the higher evolutionary status of the male was based on the fact that men invented pockets (in pants) first (women have to carry handbags, etc.) - but, for some odd reason, that argument has been summarily dismissed by all females that have encountered it (I guess all men know who really wears the pantsuit in the house!!)


There's no word yet on if the phrase "men are pigs" will have to go out of style; I don't think swine chromosomes were rooted out. 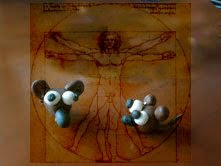 Gotta start off 2010 with  positive news!! Good findings beyond coffee ... apparently cellphone radiation, much-maligned in the past as being potentially carcinogenic, has been identified as being a great way to protect against alzheimers!!

Florida scientists have discovered that phone radiation actually protected the memories of  mice programmed to get alzheimer's disease!


The mice in the study were exposed to 2 hours of (cell phone) radiation a day for 9 months!

The exciting discovery is that electro-magnetic field exposure could be an effective, non-invasive and drug-free way to prevent and treat Alzheimer's disease in humans. Apparently, these mice mimic some of the symptoms of Alzheimer's in people, so this is hopefully for mice and men! Further, this could also help treat traumatic brain injuries, as in soldiers during war!


We don't recommend spending 24 hours a day on a mobile phone - we don't know the long-term effects, and bills could go through the roof.


In other words... get off your Nexus One after a couple of hours!
Posted by rajat.mukherjee at 10:13 PM No comments: