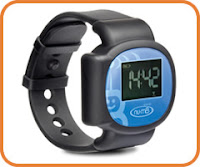 Loc8u has created a watch that tracks kids with GPS - and, of course, the privacy geeks have something to say! This is a violation of privacy, etc. etc.
Tell me that when I am running around the Great Mall in Milpitas for 45 minutes going all crazy that I'll never see my 4-year-old again ... this happened on Memorial Day a few years back, and, believe it or not, happened again (for only 5 minutes tho') with our younger son a few years later at Sears ... he was walking towards the escalator, assuming we'd gone down! As a parent, I have a right and a responsibility for a child, whether he/she likes it or not! If I suspect he's doing drugs at friend A's house, I'd rather he not hang out at A's house. He may find another way, but it is my prerogative to do my best to keep him honest while he's under my roof!
Privacy geeks make noise about every damn thing on the Internet! Leave the choice to the user! If there's value in search history, I'll turn it on - leave the search engine alone! I'd rather have a soccer result show up if I type "football" after reading an article about Maradona, than be told again about Brett Favre! And if I just Tweeted about Romo, I'd rather see a post about his performance for the same query "football" 5 minutes later!
Yeah! I've heard the argument - false positives! Sure - you'll get it wrong twice in 20 tries - egad ... that's 10 percent! Double-whammy digits! So what? You got it right 18 times! And I gave you my permission to do so! And with session-based personalization, you can do it all anonymously!
Opt in! That's the key!
If you want privacy - hey - go for it! Go into incognito mode and make merry. If you want privacy, tell the government to stop putting all your public records online, so that stalker doesn't find your phone number and address in 2 seconds on a search engine! Don't blame the search engine! And, a piece of advice ... stop putting those drunken photos on Facebook! Better yet, create 2 different accounts - for friends and your mom! Or suffer the consequences ... (LOL!)
Like ad networks aren't tracking you! Of course they are - and they should, so I see an ad for Hawaii snorkelling after I just purchased tickets to Maui! I'd rather see that ad than one for a GM car saying "May the best car win!".
Beacon! Why didn't you just do opt in, instead of trying to muscle your way in?
Online privacy is over-rated, and under-understood! Many complain that Internet companies are "watching you" when users are willingly using useful services. Sure, logs data, when used, is useful to the algorithm ... but they also add value to the user! If I had lots of friends, I'd sign up for Latitude. I'm ok with turning on tracking for traffic updates ...
As long as you can turn it off - do so and shut up (or go here) - and that's my "private" opinion! Oops! Did I just say that on the Internet?
Posted by rajat.mukherjee at 9:42 PM 5 comments:

A felicitation to The Internet on Labor Day!

As we often take the time on Labor Day to commemorate human endeavo(u)r, I thought it appropriate to give kudos to one of our colleagues-at-work-and-home: The Internet!

Here are some reasons that makes sense:
Long live... our-favorite co-worker ... The Internet!
Posted by rajat.mukherjee at 2:53 PM 5 comments: