Leapfrog! All you need to know you learned from frogs! 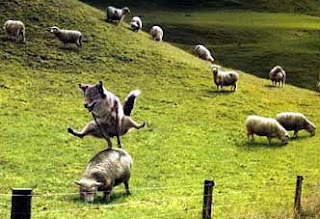 All I really need to know I learned in kindergarten - I haven't actually read Robert Fulghum's book, since I assumed the list below summarizes it's philosophy of living.


The one I like best? Nap every afternoon! ...but despite having a nap pad outside my office at work, I haven't taken this advice. I even have unused massage coupons - I guess I did not learn in kindergarten. Have people noticed that what we learned - be direct and honest - doesn't always earn the best results in corporate life?

In Silicon Valley, others don't seem to have learned from kindergarten either - the philosophy seems to come from frogs - Leapfrog!


If you don't innovate, and don't leapfrog the first chance you get, you die!

Given the recent news about Apple and Adobe, it looks like some folks played hookie from kindergarten and collected frogs instead - or maybe, they learned from frogs in school - (Eliot did ... in E.T., and learning toys from Leapfrog are popular...)


Leapfrogging is not about sharing, saying you're sorry, and not necessarily about playing fair, or being nice and giving credit! It's about sitting on your haunches, and kicking off with the strongest legs you have and landing as far afield as you can.

Sharing? Qualcomm and Broadcom are looking to share nothing more than the word "com" in their names! Patent law is about not sharing! And while folks cry on about sharing (open source/open systems anyone?) most successful T-ecosystems - Facebook, Microsoft, Apple, Cisco, Blackberry, IBM are pretty proprietary, if you ask me.

Apple just about slapped Adobe, which, through the years has been pulling Macs with their products (or did Adobe screw itself?). Didn't Microsoft actually help Apple tide through some tough times, only to see them surging forward on phones, and now, personal computing?  Google settled a core search advertising Yahoo! lawsuit - for a tiny amount (in hindsight), and isn't really opening up the lane for the Apple-mobile to cruise - Android anyone? Oracle, through its acquisition of Sun, effectively chops MySQL off at the knees, just before it jumped ... frog legs for a snack! Kodak? Anyone use Kodak anymore?

Flush? Companies regularly acquire competitors, or use other means just to flush them down the toilet.
Amazon - Junglee. Microsoft - Sybase. Autonomy - Verity (after leapfrog!). When you play Frogger, you better watch for traffic!

Hey ...this ain't kindergarten! Leapfrog or croak!
Posted by rajat.mukherjee at 8:31 PM 3 comments: