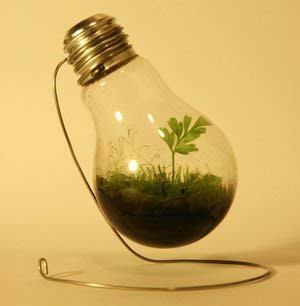 Today, last day of the decade, I decided to clean up the garage: a set of boxes conspicuously occupy the center of the third garage (that's for the Tesla when I can afford one) - so they get my attention - boxes with stuff from my earlier jobs, and books, papers, patents and presentations from my research days.

I decided I could no longer decipher the papers and made the hard call to recycle them - cache coherence is no longer coherent, and snooping on the bus seems to be just wrong! Papers on fancy machines, like the BBN Butterfly, Sequent and the Connection Machine (Jurassic Park) went the way of the dinosaur - right into the recycle box! Systems, such as Willow and Dash, V and Presto, passed messages to each other right into the shared memory of the Friday truck. Venerable names, such as Hennessy, Agarwal, Levy, Archibald, Gupta and Goodman, printed on many papers in black and white, had to be bid adieu. Gray and Kennedy caused a moment of darkness ... a moment to ponder the meaning of life...

Fond memories of graduate school - soccer in the rain at Rice with the Calzones (remembering Zefarino, the Mexican math-student-soccer-Jedi-master), parties at the Graduate House, Valhalla, beer-bike, walking with my colleagues to Pike Place in Seattle during a conference, the depressing moments thinking I'd never finish my Ph.D. ...a little smile broke when I saw the graduation documents. Was the degree worth it? That's when my hair began graying!

Projects and presentations went right (recycle), expense reports and old perf evals went left (shred) - a couple of decades left to waste! Oooh - there was a photo of a chip I'd designed! My Chip - with my name etched in the silicon! I have it somewhere - it looks good as a paperweight in the clear MOSIS plastic container.

We spend so much of our lives studying, working and achieving something that's as intangible and transient as ... a network packet! Dunno about you, but it leaves me with a sense of loss. Some gained, so much lost!


Everyone wants to differentiate and do things their own way! Yes - we do need mobility in a car! Literally! So car manufacturers are doing fancy things with the dashboard.

One thing I can't do today in my "luxury car" is plug in an auxiliary audio input!! Okay - it's about 5 years old ... but I'd  expect them to have seen that coming? It's quite mainstream today ...

Now, they're going all over(dash)board to connect up music systems (like Pandora), maps (Google maps and Google Earth), search and calendars (like Google search and Google Calendar), etc., to the car! That's all very important and very nice - but why replicate the entire stack?

Audi is apparently bringing a bunch of these features to the dashboard - as quoted:


The MMI navigation plus system has an integrated GPRS/EDGE modem that will be updated into a 3G modem mid 2010, to allow Google Earth. To use the new online services the customer needs to insert a SIM card in the MMI Navigation plus or pair their mobile phone with the MMI over the Bluetooth SIM-Access-Profile. Aside from the Customer’s existing mobile phone data plan, no additional contracts are required.


It seems the functionality that is already available in the mobile phone is being replicated into this dashboard device. GPRS/EDGE/SIM card ... do you see where this is headed?

There's no need for this, people!! The mobile phone already doubles as a navigation system (separate navigation systems are so....last decade!). You obviously need a phone to talk to someone...and you can even talk to the phone today (voice control, voice search). I get my email and calendar on my phone already. Where's my music? On the phone! 5 years back, my Sony Eriksson phone had a built-in FM radio, as do many new phones and music players - so stop wasting time, and just provide a dashboard dock for my phone that can then use the dashboard screen as a display. With Bluetooth or simple protocol to communicate with the device, e.g., via it's earphone connector, you should be able to  screen the next YouTube HD movie for the kids at the back, or get a map and directions to the theater. Yes - it would be nice to have the controls on the steering wheel.  Give me that - but I don't need another SIM card! My phone already has one!!

And my wife's contacts are different from mine - she doesn't need to see the numbers I call :-). All she needs to do is get in the car, adjust the seat (my car does provide a button for that, thank God!), adjust the mirror, and slide her phone into the dashboard dock.

I've already told you - it is just a matter of time that the phone OS is the only thing we'll really need...get with the program! 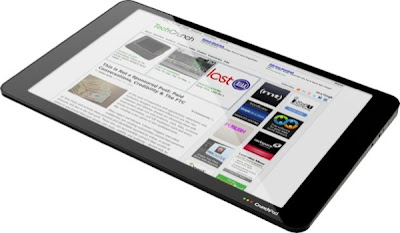 While Florida basks in the controversy of "transgressions" of feline proportions, Silicon Valley, not to be outdone, has launched an infidelity of its own: TechCrunch (TC) and Fusion Garage (FG) are no longer BFF - the much-heralded CrunchPad went poof before CrunchTime, and emerged as the magical JooJoo.

"And I’ve also lost a friend – Chandra spent months in our office this year and, until a week and a half ago, was the kind of young, determined entrepreneur that I admire. I thought we’d be friends for the rest of our lives."

TechCrunchies who drooled when they first heard about the CrunchPad, and many of the tech-blogger friends of TechCrunch, are now shunning it! Many are taking sides in the dispute, and while that's anyone's prerogative, it's really for the legal system to determine the outcome - as "litigation is imminent". FG's position - that there was no IP contribution from the TC team - is a reversal of the TC story. Was there an agreement in place? Birthday cake loosey-goosey? A contract in writing? If not, why not? Unknown but critical. TC is a popular tech blog, wields enormous influence, and can easily use their brand to skew perception (as we've seen with the about-turn-Crunchfans). While TC was easy with exposing unethically obtained Twitter documents, they seem quite selective in what they publish in this case.

Anyway, this last minute change in "ownership" does not magically make the product bad! Overnight!!

Expensive? Maybe! - it will cost $500 instead of $300. Did folks really believe that something that's as "slick" and possibly more powerful and general purpose than an iPhone, with a huge touch screen, would really be priced at $300? Seems like the only way that would happen is if heavily subsidized (2 year wireless contract with free TC subscription? :-)). Just blogging that something's going to cost X does not make it happen. Maybe the $300 price was a promise that could not be kept.

Assuming TC wasn't jilted at the altar by FG, let's talk about the possible runaway success of the CrunchPad - would TC really be able to compete with an Apple tablet, even if it did turn out to be more expensive, as reported? Writing tech blogs and competing with Apple are very different things...

Some folks think TC is lucky since it got out of a bad situation with FG. TC may indeed be lucky, not because of the rift with FG, but possibly that they don't have look embarrassed by Apple in 4 months by an $800 or $1000 iPad. That's not considering the Nook, Android Netbooks, ChromeOS, Sony Readers, etc.

And ... irony of ironies ... the head of the TechCrunch Crunchpad team is Brian Kindle!
Posted by rajat.mukherjee at 12:57 PM 1 comment:

May the iForce be with you! 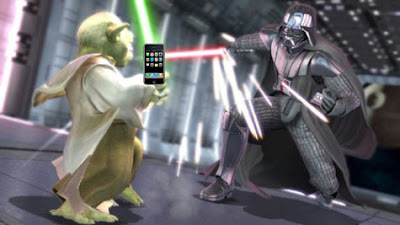 The lightsaber is a versatile weapon of destruction! While the adversary is mesmerized with its neon glow as it cycles phychedelically, you can calmly sever his arms! If you lose it during a battle, use the force (you just have to set your mind to it) and it flies back into your hands, confusing your adversary for that fleeting second while you turn it back on and plunge it forward ... with guts. If the battery dies...no fear - you can chuck it at the forehead of your enemy, and the heavy handle knocks her out!
Well - the mobile phone just became your 21st century lightsaber - it's WIFI beam just turned your TV on! RedEye just turned your vanilla iPhone into a bona-fide universal remote. So when DarthVader comes huffing into your family room when you're watching the exciting last 2 minutes of Monday Night Football (and you're not in the mood to duel) just whip out your phone, surreptitiously turn on the surround speakers (behind him) at high volume, and, before he can turn back, hit him on the helmet with aforementioned phone! It can even make authentic lightsaber sounds while flying through the air.
Oh - and while he's down, pull out his intergalactic credit card and swipe it on the Square credit card reader that you just plugged into the phone. This Square technology is disruptive, and you can make Vader pay, as you can now accept credit cards on the go!
After the transaction has been consummated, and he's still on the floor, lie down next to him, connect your phone-saber into the Cinemin Swivel and watch King Kong on the ceiling! You might just become friends!
Reasons why the phone is actually more powerful than a lightsaber?
May the iForce be with you!
Posted by rajat.mukherjee at 8:55 PM No comments: