Ups and downs - is it the genes? 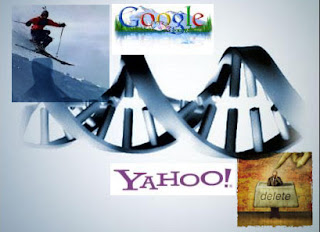 Ironic - it was on my company ski trip that I learned that Yahoo! had formally announced layoffs. I was musing how and why fortunes change dramatically across a few years!

I remembered a tidbit of information that I'd learned at a Verne Harnish talk on company DNA/philosophy/culture and compensation.

Apparently, Goldman Sachs has approximately half the number of employees compared to Morgan Stanley (and Merrill Lynch) but the average salary is much higher, and the profit per employee for Goldman is 3 times higher. The question - which company is better prepared for a downturn? The answer - layoffs of equivalent magnitude would impact the company with more employees greater (more disruption). Is that downturn here?

Interestingly, I believe the sub-prime woes have not really impacted Goldman as much as the rest of the financial sector, right? Is it just a coincidence?

Maybe that tidbit of information is worth noting!! Hiring was rampant at both Y and G in 2005/2006 - but maybe they hired differently? Is it a DNA issue or just that everyone gets older?
Posted by rajat.mukherjee at 1:59 PM 2 comments:

Sun to Snow (and earthquakes!) - it's all here!

The grass is greener on this side of the world in January, and golden in the summer - what more could you ask for? 45 minutes to Santa Cruz beach (admittedly the water's a bit cold), 3 hours and you're skiing in Tahoe. Feeling a bit lazy and bored? We'll give you a little jolt (only 5.6 on the Richter!)

And if you are bored with the sun, we have rain, too, and the occasional snow - like we had over this last weekend. Fantastic views of snow-covered Mt. Umunhum from Almaden. The clouds almost came to our knees!
Posted by rajat.mukherjee at 4:04 PM 2 comments:

So...I was trying to explain search monetization to my boys, 12 and 8, while driving to music class last Sunday. I said "Google and Yahoo put ads above the search results, and when you click on them, they make money!"

My 8-year old says - "Wow! That's cool. So we can keep clicking on the ads and you can make more money!" Impressed, but sorry to burst his bubble, "No - search engines guard against such stuff, so that there's no click-fraud." Pause. "Papa? Does this mean that on some computers, where you have to double-click (home windows vs. his mac at school) that you make twice the amount of money?"

Touche! The name "DoubleClick" finally made sense. And Microsoft ... what vision!

It's no wonder that Amazon settled their patent dispute on 1-click shopping checkout with Barnes&Noble that quickly!!
Posted by rajat.mukherjee at 3:12 PM No comments:


A few years back, demos showed how Java technology would help you walk down the hallway and connect your computer to the random "chalkboard" display, or print on the local printer in the corridor. Further, when at IBM's Almaden Research Center, there were these crazy demos of Personal Area Networks (PANs) where you would transfer your business card to someone just by shaking hands with them! (a jolt of 1-way-electricity would be nice for some!)

Now, there's the iPhone and (more grand) the Surface computer, taking the interaction of humans to humans, and humans to computer to the next level. From photo albums to skateboards, silicon thoughts (ideas around silicon) are changing the way we live, play games, get our daily news, collaborate, find directions and buy stuff.

Loved Microsoft Marketing Director Mark Bolger's comment at CES 2008 about how Bill Gates' vision was a computer on every desk (sorta done), and now every desk could be a computer ... for that matter every surface... nice :-)
Posted by rajat.mukherjee at 2:42 PM No comments: