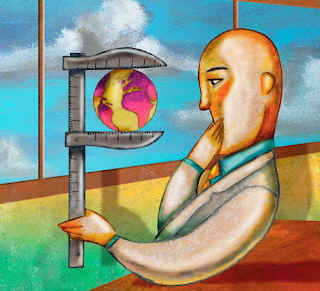 The world is flat - and small too!  In fact, sometimes, I feel, as time goes by, it’s getting tiny!

25 years ago, when I was in high school  in Bangalore, I could not have imagined that I’d be living and working in California in the U.S. In fact, I probably didn’t know about San Jose, and Silicon Valley.
I would take the company bus to school in the city, and take the bus back home to ITI township (my dad worked for ITI (telephones)). One of my best friends would take his bus back home to the HMT colony (his dad worked for HMT (they made great watches). We would walk together after school to our respective bus stops! We never took the same bus to school or back home.

Fast forward...I’m sitting in the Google shuttle, and I look up from my Nexus One. I see a familiar face. My high school buddy is sitting in a seat in front of me. That’s a Nexus! We share a workplace (we took completely different paths to get there) and we’re shuttling the same bus, more than 2 decades and thousands of miles away from where we were born. It’s a small world!

How far we’d both come to finally take the same bus! Interesting? Ok...now...

I’m sitting at my cube at work, and I see a couple of people walking towards the door to our office. One of them’s leading ...there’s a big smile on his face, and he's saying my name as he reaches his arm out to shake my hand!  His face is familiar, but I cannot place him in that instant.

Turns out that he’s a high school buddy, who I’ve not seen since graduation (except on Facebook, which is why his face was familiar). He was visiting Google to meet an ex-colleague for lunch, and was just walking past my cube to check out the view from the window, when he saw me and recognized me. It’s a tiny world!

Communications, technology, education, careers …. how can one imagine that the world has gotten so flat and so small, and there are no boundaries or barriers.

Time has flown (HMT still makes watches!) and ubiquitous communications are here (ITI is on the verge of bankruptcy, and traditional wired telephones and exchanges are all but history...)
Our parents were coincidentally in the right place - Bangalore - the Silicon Valley of India … their progeny are sitting in the same building on different floors, trying to push the frontiers of change just a little bit farther!

How tiny will the world be 25/50/100 years from now? Will we have nationalities and passports or will we just be citizens of a single heterogenous union? Will we need to take a bus to work? Will we only recognize each other online?