This is the first invited post on my blog. I wanted to write about this topic, but Ronny, our very own highschooler, did a great job publishing this on Nanothoughts, a blog he shares with classmates from his Bellarmine freshman class. Enjoy Ronny's post!

A rather poetic way of putting it, but I believe that the momentous occasion this article pertains to deserves it. This is a moment that future historians and students will look back on. Whether their rearward glances will contain regret or admiration, only time will tell. But for now, we've got this to chew on: 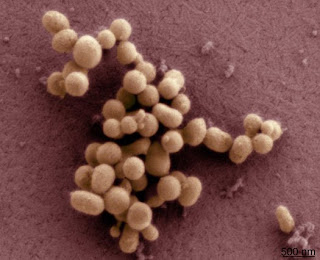 Or at least a certain group of men have. On May 20, Craig Venter and a team of top scientists made an announcement: the world's first synthetic life form - a bacterium with a genome that is completely man made - has been created. The cell, dubbed Mycoplasma laboratorium, has been worked on by Venter's crew for almost fifteen years, and it's finally here. The cell, which takes physical components from a preexisting cell, but has a genome that is completely man made, has already replicated itself over a billion times.

Before this achievement, the longest synthesized sequence numbered about 30,000 pairs. The first chromosome attempted by his crew, that of the Mycoplasma genitalium genus, the smallest naturally occurring genome: 580,000 pairs. The final product: over 1,000,000 base pairs.

So how did they do it?

Venter's group started with a very basic genome, that of the Mycoplasma genome. They began to eliminate genes, figuring out which ones were absolutely necessary to life. And after determining the Minimal Genome, they began to create the world's first man-made functional DNA sequence. The team used machines that produced DNA sequences up to 80 nucleotides long, but seeing as they eventually produced a genome 1,000,000 nucleotides long, you can see why this process took upwards of a decade. Venter explains the attitude his team took towards the process: "When we look at life forms, we see them as fixed entities. But they change from second to second. And life is basically a software process; our genetic code is our software, and our cells are dynamically, constantly, reading that code." In a way, what Venter's group did was change the operating system of the cell when they replaced its natural DNA with their own hand-crafted stuff.

And speaking of hand-crafted, this man-made genome is built to order. When working with such small bacteria, contamination is a big issue; someone sneezes in the lab, and you've got ten thousand new lifeforms, ready to be misidentified as your man-made masterpiece. So the crew over at Venter's included a couple of "easter eggs", including a functional html website in code, names, and even philosophical quotes in the code. These "watermarks," as Venter calls them, make misidentification almost impossible.

But what's really astounding is what this project means to us. The institute plans to use this achievement in producing biofuels, food on a larger scale, and even vaccines and medicines, much like E. Coli is altered to produce insulin and human growth hormone. These achievements have prevented disease and death in thousands suffering from diabetes or growth instability patterns. Since the genome for this kind of organism is completely artificial, it would be much simpler to simply include DNA that produces these kinds of necessities instead of having to inject it into plasmids and hoping that bacteria incorporate it when they undergo cell division. Geneticist Vyacheslav Tarantul said that this kind of cell would probably be more efficient than current bacteria used to do these kind of jobs, as it would have a genome geared to do only one thing. In this way, the man-made genome may prove to be a saving grace for mankind. 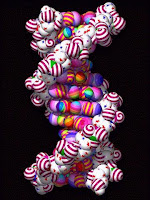 Unfortunately, Mycoplasma lboratorium may have negative effects as well. Among these are claims that because it is now possible to create completely synthetic genomes, governments and terrorists may create biological weapons, like cells that produce hydrogen cyanide or even sarin. The National Farmers Union also say that the cell may have a negative impact on the food industry, and that "the synthetic life form poses a risk to humankind and the environment."

For now, though, the cell only subsists on extremely rich substances where it is grown, and since it hasn't been subject to millions of years of evolution and can only infect goats, it poses no real threat to mankind as of yet. Critics say, however, that future man-made genomes can easily be tweaked to replicate behavior of parasites and infectious bacteria.

Deadly disease or answer to pleas, the changes brought about by Venter's team will be monumental. According to Venter, creating single celled eukaryotes is very viable, as chromosomes can be transferred "across kingdoms", but creating life on the scale of animals, even insects, will not happen within his lifetime. Sorry to all of you Jurassic Park fans out there, but dinosaurs are out of the question. As for the rest, we'll just have to see.

- Rohit (Ronny) Mukherjee
Posted by rajat.mukherjee at 11:48 AM No comments: 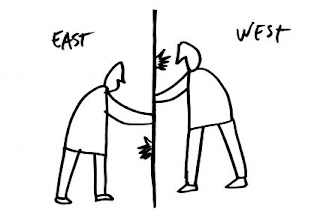 Judging by the Internet connectivity at the hotel that I stayed at over the last couple of days in New York city, it is reasonable to say that the internet works better on my shuttle bus (back west) than it did at the hotel.

While the weather this year on the west coast has been far from exemplary, thanks to El Nino (?), I did arrive to some sunlight, which quickly faded to rain, resulting in a couple of hours delay from JFK to DC.

Judging by the results of the Cavs-Celtics game, it looks like LeBron will not really get a chance to redeem himself in the Nike puppet ad (3 championship rings :-)), and the Lakers will end up beating the Celtics again :-)

Presumptuous? Maybe - but let's throw caution to the wind and predict the Sharks winning the Stanley Cup (they did make sure to not flame out in the first couple of rounds of the playoffs like they usually do!)

Now - Internet connectivity at Washington D.C., is also problematic (at least with VPN) - this does make cloud computing a little harder, does it not? East = 1, Cloud = 0.

Walk into Times Square and it all balances out - NY City is still the capital of the world! I felt real nostalgic being back in NY (especially as it was not freezing cold, like I remembered it...)

East is east and West is west - and hey! - we have 2 boys, one born in NY and the other...sunny California!

Postscript (5/23) - The bold prediction about the Sharks turned out to be foolish! Score W=3, E=1.
Posted by rajat.mukherjee at 3:48 PM No comments: 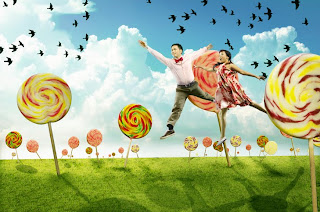 This week has been crazy!

I finally got to read the sacred memo from the special one  (not Mourinho, who's also special, but the really special one :-)) Today! days after it was real-time news :-)

That's cause I was busy at work - yeah ... sometimes work comes before fun things like blogging! Ironically, one of the things that I spent some time on has similar keywords to what became major news this week - Adobe's Creative Suite (one of my products - Site Search - offers an awesome search experience across applications in Adobe's Creative Suite 5 - check it out!)

This week has been crazy! I just said that ...

First, Apple admitted that Macs crash! This must be devastating to all Apple fanboys!


We also know first hand that Flash is the number one reason Macs crash.

News Flash! They blamed it on Adobe.

Then they said a bunch about being "open" - that, by the way, I'll ignore, not because Apple is open (closing out a reasonably popular technology on the web isn't my idea of "open") - but because, personally, I think "open" is overused and overrated. Open does not relate to success, as we've seen over and over in the technology industry. IBM still rakes in billions with proprietary systems (sure, the banks are paying these billions with taxpayer money), Microsoft continues to rule with proprietary systems (offices with windows), and Google's search algorithms are not open-source (pagerank, not openrank). I still don't see Linux beating Windows or OSX.  iPhone and RIM are still pretty strong, tho' Android (the open one) is coming on strong.

Lots of good points in the commandments. I buy some of them. Not this one, though...


We cannot be at the mercy of a third party deciding if and when they will make our enhancements available to our developers.

Apple decided it did not want to be at the mercy of developer choice. It really isn't at the mercy of a third party, is it? If a "native" iPad app is better than a slow Flash app, users will get the "native" app, no? Let the user decide if he wants to play a crummy game! Why not let the developer decide if something's good or bad? It may be the best way for her to optimize her resources and hit multiple platforms in one shot, instead of being forced to develop more than once. If a developer can write in Java to run on all platforms, maybe they can write in Flash for all platforms (write once, run anywhere). Performance, good or bad ... should we let the developer decide? No! Apple decides.

Amazing that there's so much power here driving an entire industry to shift. I shouldn't be surprised - a president can take a country to war!

iPhone succeeded because the consumer loved it and the developer decided it was worthwhile developing for. Apple will continue to succeed as long as it is building compelling products! They just need to be more compelling than the other ones out there. iPad is a case in point ... compelling!

In the news:
Adobe, trying to Flex it's smaller muscle (remember, an apple a day keeps the doctor away) is offering Android phones to its employees.

Also in this week's news:
Our friends from Redmond also took the opportunity to say that HTML5 was the way to go (too much time and effort spent competing with Adobe with Silverlight? What becomes of Silverlight?)

In other news this week:
Apple's not just shutting down Flash videos globally, it's also stopping the music from playing on Lala :-) What becomes of streaming music? It becomes (for now) iTunes credits, and it stops playing on Google as well?


Google is going to have a problem because Google is only known for search,' said Ms. Bartz. 'It is only half our business; it's 99.9 percent of their business. They've got to find other things to do. Google has to grow a company the size of Yahoo every year to be interesting.

Apple posted. Adobe posted. Microsoft posted. Google posted. And of all people, Yahoo! boasted! This is La La land!
Posted by rajat.mukherjee at 12:27 AM No comments: