A Brief History of Search - A play for 3 ages! 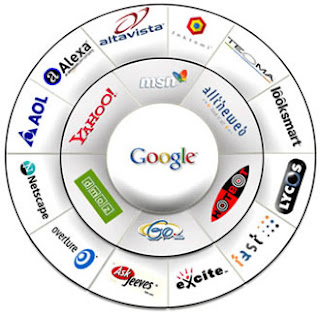 [Any resemblance to real persons entities, living or dead is purely coincidental. Certain events may seem overly dramatized - after all, this is a play...]

: Who'd have imagined - I wrote this directory of a few sites, and thousands of people want to crash my servers. Let's make a company ... we're Stanford!

: Ya know - we're Digital! I'm this really fast engine that gives millions of results for each search really quickly. The more the merrier ... and faster faster faster... my head is spinning...need some cold mountain air...

: Crap! This directory is getting larger everyday and I don't have any time for parties! Let's try this search thing that we've heard about. Hmm! It seems to work. Party time!

I enters. He has large sideburns, and powerful glasses ...

: We're Cal! We're the spider trickster! We have the ability to defeat larger adversaries through wit and cunning! We're a hot Bot too.

: Yup! Pretty hot! Look at the funky tri-color logo! I like it!

: Wow, I've been found(ed) at the right time! This search thing rocks! Let's try to crawl and index more stuff ...

: Hey this I search thing works quite well, let's use it ... and slap on some ads while we're at it

: People click on those ads? That's better than those blinking banners I tried last week

: Wow! Lets put more ads on these search pages and make real money ... real fast! Let's put a little knob on how many ads go on top - we can turn that up higher or lower even higher ...we'll try banners on search later :-)

B lumbers in. He's big, and wears blue overalls with suspenders

G enters from the other side, sporting blue T-shirt, red shorts and lime green rubber slippers

: Hey - this Blue algorithm is quite Clever! Hubs and Authorities, huh? Neat! What? Deadline? Gotta write a project paper? Give it a few neat researchy twists and publish or something...

: What the ****? Everyone's at our doorstep - they feel lucky to find a useful first result more frequently....we're actually ....useful! Hey....stop knocking at my doors...I didn't even market the damn thing yet!

: Hey - let's give this G thing a shot - they're apparently very lucky - so maybe we can make some more money... and don't forget to slap those ads on!

: Hey! What just happened here? I miss you! Can't I assume you'll go out with me tonight?

: Hi! Can we please get some recognition here? After all I went to Stanford like you...pretty please!

: Sure - slap that colorful ballsy logo on those results - folks seem to like you anyway...kinda cute!

: Are you sure you want those RPM numbers too - we'll send them over next week?

: Yeah! Thanks - they look pretty darn...WTF!? This is a shitload of money... this search thing is actually ... mandatory!! These geeks really built some magic pixie dust here... We've got to build this or something....

Enter O:
O is wearing a suit and tie and is carrying an expensive leather briefcase

: Hi! I'm O. BTW - I know how to make you more money - more more more! We are bad! Downright evil ... but buy me and we'll make you money... and ...we've got some cool patents too, including a few search ones. Remember A? That really fast chick? She's in my harem now...

: Money! Hotel California! I don't want to ever leave! This may just be a gr8 idea!

Meanwhile, I is twiddling his thumbs ...

: Hey. What's that flashing banner?...Oh! our old friend's still around. Hmmm! Let's buy them and turn things harder for G, now that they're doing mail and finance and stuff ...

: The DOT com's imploded, but V's bought our U-seek, and Y has our web search - we're outta here! (our bet of cache-ing out sure paid off in a funny way ...)

: Hi I! How 'bout we make friends. We do live in the same big house now! I do know a few tricks. Be careful, I used to be really fast! Maybe we can do this together!

: What? This patent on making money on search is OURS?? Sue the twits! 300 Million? 300 Million Blue Blistering Barnacles! Take it before they change their mind!

: Are those bozos not looking at the RPM and growth numbers? Well...they're grown ups and ... we're growing up...no need to point it out to them...

SEATTLE:
It's a rainy day. M, wearing horn-rimmed glasses, sleeves folded up to the elbows, is looking out the Windows

: You know...we're all the rage with our software the world over! I'm just about ready to retire, go off and save the world and deal with HIV and malaria and stuff, but I'm surprised with this G phenomenon! Looks like I'll have to deal with a delay in my plans. Put a few billion on researching that, will ya?

: Let's shore up the core! Let's focus on quality - people should always feel lucky - like we are, for finding this pixie dust. And we're making good money (not evil) - let's go public! We can do a whole lot of things with that money!

: Money's still pouring in through every window, but we should probably keep an eye on this new advertising-based free-ak-oconomy thingy! It's all the rage!

: Wow! That IPO was a fun ride! Who'd have thought we'd all be millbillionaires!! Sweet! Silicon Valley rocks!

Audio Effect: The ka-ching sound of money repeats over and over for a while.

: Ok! That's it! We're not missing this boat! Put a few more barnacles on it!

Y is relaxing in a Sunny Vale, wearing a Hawaiian shirt and a Panama hat, sipping Margarita

: OK! we've figured out this thing! We have all the ingredients! It's all about execution! (Execute or be executed!) There's money to be made and we're a search company now...and a media company...and a portal...yeah! that's it! we're a "media search portal mail social network" - let's spread the love like peanut butter.
Audio Effect: A yodel sound is heard in the background!

: Shit! This thing is harder than I thought. Put some more money into this! That'll fix it!

: Man! Am I glad this is lawsuit is behind me now...onward! forward!

: Wow! Look at these numbers!! Who was that lawyer who settled for 300M? Fire him! Every damn percentage point of market share is worth a chunk of change!

: Shit! This thing is harder than I thought. Put some more money into this. That'll fix it!

B is seen in a dark bar, Beer in hand, listening to Blues music

: M is into search now? Darn! Now I'm Blue! Maybe we should have sued when we had the chance ... Now it'll be sour grapes! Well ... we're research and we make a billion blistering blue barnacles licensing our patent portfolio - so we'll make it up in .... say... a million years! (we'll still be around)

: Let's get all of online America ! What?!!! G paid a billion green ones for that traffic? Who else is there besides the Fiery Fox out there, who we can't catch?

: Shit! This thing is harder than I thought. put some more money into this. That'll fix it! Wait! Let's give our users some money while we're at it - cash back...sounds fun

: Okay! we're almost there...almost as good as G.... we'll kinda sorta. That ought to be good enough! You want to do a new feature? Why? We're sitting pretty at 28% market share - and we have half the online world coming to our doorstep every day - no fear... O, A and I are here ... we've been doing this for a long long time...we know...

: (kicking and screaming) NO NO NO!

: Don't worry...I'll help you. Remember we were always friends? We went to Stanford!

: (prim and proper) Well then ... be that way! We'll just go back to our labs then...we have live labs, search labs, labs with windows. We'll wait for you to calm down! I cahn wait, you know!

Stockholders : What - are you crazy?? At least go on a damn date, will you?

: Surely you're coming back? At 35? Maybe? ...
There is no answer. A door is heard shutting. There's a muffled shout and the sound of a chair being thrown against the floor. Lights fade!
Lights fade in. Some time has passed. A few gray hairs are seen on some of the characters

awesome history. so much of it is tied to our careers, it is almost depressing. at least you landed at the right place.

oh by the way, this is pradeep j. that was the anonymous google account i use, and frankly the world cannot afford to use too many things from G! it is too dangerous.

A great history of search! Can you extend the play to show us the future?

yes :-) and there's an alternate ending as well (free on the dvd)!

Love the stage fright of the tweeting bird at the end!! This was just hilarious!!!

Now we know how it really happened!