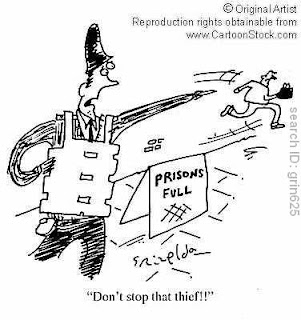 As California tackles its $24B budget shortfall, it appears as though an innovative (albeit controversial) part-solution has presented itself! Moving inmates from California's prisons to Michigan!

I'm not an expert on incarceration (although most of us in the Valley are tethered daily to our computers while the golden California sunshine oozes unused outdoors!), but it seems like moving inmates out of the overcrowded and more expensive California prison system to help transfer funds and preserve jobs in Michigan is a logical solution.

Apparently, the cost per inmate in California is significantly higher than other states - maybe we feed organic food to our inmates and buy them iPhones - so this makes fiscal sense. Assuming that inmates will continue to be visited by friends and family, this could also inject a little something into the travel industry!

The California system is also backlogged on executions. I assume this is expensive as well - as quoted:

Since Robert Alton Harris' execution in 1992 -- the first after a 25-year hiatus -- California's actual imposition of the death penalty has slowed even more. Just 13 people have been executed since then, which is less than one per year. These days, an inmate is more likely to die of natural causes than to be executed. But the number of people sent to death row has continued to climb, and San Quentin now houses 682 condemned men.

While this solution may sound insensitive (not my intent), this could help - ironically, the "land of the free" has the highest incarceration rate of any country out there, as quoted..

As of year-end 2007, a record 7.2 million people were behind bars, on probation or on parole. Of the total, 2.3 million were incarcerated. More than 1 in 100 Americans were incarcerated at the start of 2008. The People’s Republic of China ranks second with 1.5 million, while having four times the population of the United States...

Hey, what about GITMO?
Posted by rajat.mukherjee at 3:20 PM

Great to know about this..

Thanks ever so much, very useful article. Great information! Very smart, thanks for kindly sharing it with us. Very well done indeed. If you do not mind, please visit my article related to pandeglang district in Banten, Indonesia at Kenali dan Kunjungi Objek Wisata di Pandeglang or Kenali dan Kunjungi Objek Wisata di Pandeglang and if you want to learn how to speek Indonesia just see Learn Indonesia Language

Find your great Travel News and sing the songs at Free Song Lyric or you can watch the drama at Korea Drama Online one of great korea drama is A Love to Kill if you go to travel to Indonesia learn Learn Indonesia Language first! And find your home cari rumah or make a blog Belajar membuat Blog find your home again rumah dijual and again at jual rumah then if you want buy a new laptop see the Laptop Price List or you can buy a New Blackberry and then take care your Health & Jewerly.