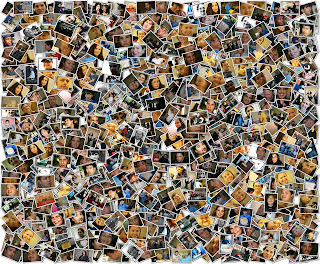 Apparently, our friend Bill stopped using Facebook because of an overload of invitations from folks who wanted to befriend him. I guess he has more important things to do, besides clicking on invitation emails that take him to faces he scarcely recognizes...
It isn't only Bill Gates who has the the problem of too many friends! Despite being a zero on the celebrity scale, I sometimes get friendly invites that I don't recognize. With Twitter, there are some that look awful good ;-) ... maybe I should just make more new friends...
Un-information is an issue even without having thousands of followers - even a few active twittery people (twits) can cause a daily gush of tweets, difficult to consume. Quandary - I don't want to turn this stream off, since there's often useful information and I learn of new things. I deal with this by mostly following on my phone, implying that I don't typically click through to linked web pages (the most useful part of tweets) unless I'm immediately compelled - the adverse result is that I often don't see stuff I'm curious about ... my loss ...
If you follow the right sources, the signal to noise ratio is quite high - but all signals are not aligned to your areas of interest. It is difficult, however, to set up the topic set a priori.
The other issue is that of mixing personal and professional streams - this, plus multiple social networks, implies greater time commitment to un-information.
This leads to the Bill Gates Law:
"More friends imply more friends, and more un-information."
Posted by rajat.mukherjee at 7:45 PM

It's true. But, personal is the new professional. I added lot's of friends and then, only to find even more of them. I stopped using facebook for networking.

Thanks ever so much, very useful article. Great information! Very smart, thanks for kindly sharing it with us. Very well done indeed. If you do not mind, please visit my article related to pandeglang district in Banten, Indonesia at Kenali dan Kunjungi Objek Wisata di Pandeglang or Kenali dan Kunjungi Objek Wisata di Pandeglang and if you want to learn how to speek Indonesia just see Learn Indonesia Language

Find your great Travel News and sing the songs at Free Song Lyric or you can watch the drama at Korea Drama Online one of great korea drama is A Love to Kill if you go to travel to Indonesia learn Learn Indonesia Language first! And find your home cari rumah or make a blog Belajar membuat Blog find your home again rumah dijual and again at jual rumah then if you want buy a new laptop see the Laptop Price List or you can buy a New Blackberry and then take care your Health & Jewerly.